As expected, work on the proto_v2 layout started this month, and is progressing nicely. The layout is being done by a community member who is making a special effort to learn how to do her work on free software, now that we use KiCAD. We find it significant that we could choose a member of the Neo900 community to bring this prototype to life. We're very thankful to ahycka for taking up this task.

We also want to thank ceene and atk for their help in the setup of the repositories: the layout is a production-ready document that could impair our company's capacity to reach its goal if an ad-hoc competitor would decide to take it to a factory without us being involved. So, for now, it's top-secret ;o) and only accessible to our engineering team. Of course when we're done with it, it will join the rest of the public code, after all Neo900 is a free hardware project, and once we have produced your device, we welcome others to make more.

Werner put up a howto review the schematics for those of you who would like to lend an eyeball or two and make bugs shallow.

We received another 40 N900 units to metamorphose them into upgraded Neo900 devices. That makes about 140 Neo900 devices in the making. We still need to source 75 to cover our current demand (not counting the 114 NeoN boards ordered by people who already own a N900), and another 450 to reach our end goal of 800 Neo900 produced. Sourcing N900 is a slow and hard process (they need to be in mint condition), so if you find any, pass the word! Kids, beware: we've spotted one recently pulled by Krampus (note the spacer frame!): 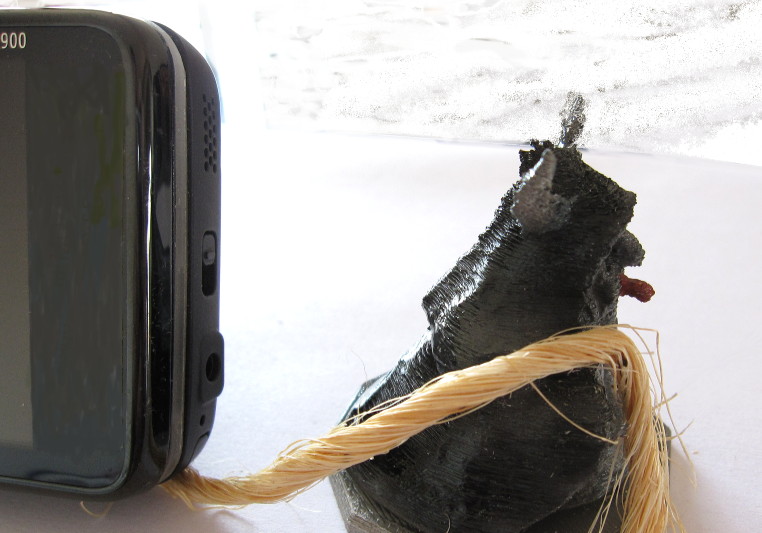 Soon after our last news in November, the Hackerbus whitepaper was updated with the following changes:

A couple of days ago, the InfraRed Whitepaper was updated with the following changes:

Finally, Joerg is reverse-engineering the Enhancement Interface Control (ECI) of N900 (which is also present in Neo900) and started documenting it. The device's jack can be used to implement a multibutton-headset control protocol and support headsets with volume control, play/pause functionality, etc. That means we can have free software to control undocumented features of Nokia hardware that wasn't used before, and our friends from Maemo are on it! Joerg posted some very technical details on IRC.

If you're going to the Chaos Communications Congress next week and want to have a friendly chat about Neo900, hellekin will be around, joinable on the GSM network. We'll update this page with more information so that we can setup a meeting!

In 2017, as soon as the proto_v2 is out we'll launch a new crowdfunding campaign to help us reach out to more people and reach our objective. In that context, Neo900 will be present at the [Conference on Privacy and Data Protection] in Brussels, end of January. This is the most important conference on the topic in Europe, gathering professionals and researchers from around the world. More on this later!

The Neo900 team wish you a great celebration for this end of year.